“In the last five years, the U.S. Patent Office has fielded proposals for a tampon with a saturation indicator, a reusable applicator, and, yes, a vibrating tampon,” Ashley Fetters writes in her terrific Atlantic piece about the tampon industry.

Okay, this instructional video that appears to be from the 1970s is the frankest, most direct instructional video on menstruation that I’ve ever seen. Clearly made for the differently-abled, it stars a very young girl with Down syndrome. Even though she hasn’t had her period yet–and seems to be around 7 or 8–her parents and sisters are forthright about explaining what happens in language simple enough for her to understand. They also repeat things over and over until they are sure she gets it.

Not only does Dad fail to blush and stammer when the girl asks him about periods as the family sits in the living room, but Sister takes the girl into the bathroom to show her how to replace a pad. Could this be the only video I’ve ever seen where they show a pad with actual–or at least visually close to actual–blood on it? Sister shows the girl how to wrap up the pad and replace it and then has the little girl practice by putting a pad in her own underpants.

A rare, rare thing: an instructional video that seems age-appropriate and actually answers the questions a young girl has about the mechanics of this whole operation. Plus–an aberrant phenomenon–this doesn’t appear to be sponsored by any menstrual products company.

Pop in a plug, girlie, and weld those bombers.

As tennis player Heather Watson refers to “girl things” in explaining her loss at the Australian Open and the press jumps on the conversation about whether elite athletes are truly hindered by menstruation, keep in mind that this is not a new conversation.

The news cycle–wait, the news cycles? Doesn’t that render it unfit?–has a tendency to investigate this matter at politically expedient moments. Check out my 2007 New York Times op-ed on how, during the 1870s and 1880s when Americans were debating higher education for women, there was a rash of studies revealing that women’s menstrual cycles rendered them unsuitable for sustained mental and physical labor.

Then when World War II rolled around and Uncle Sam needed those women in the factories, the government released a propaganda film, Strictly Personal, telling them to stop their belly-aching about bleeding. The war effort had no room for neurotic slackers who tried to cut out of work early just because they were getting their periods.

Post war, when the soldiers came home and the government was urging Rosie-the-Riveter to take off her hard hat and put on her apron, there was suddenly research showing, for example, that women typed slower when they were menstruating. A woman’s place is in the home, of course, the studies “proved.” 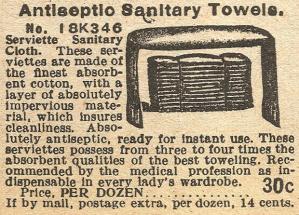 Contrary to popular opinion–not, mind you, that this is the kind of opinionated debate you’ll see on Meet the Press Sunday mornings–advertising of menstrual products is not new. It’s been around along time. As long ago as 1908, Sears was advertising “Antiseptic Sanitary Towels” (see above). And if that didn’t work for you, never fear. You had options: Lister’s Towels, say, or Hartmann’s Hygienic Wood Wool Diapers which sounds, hmm, scratchy.